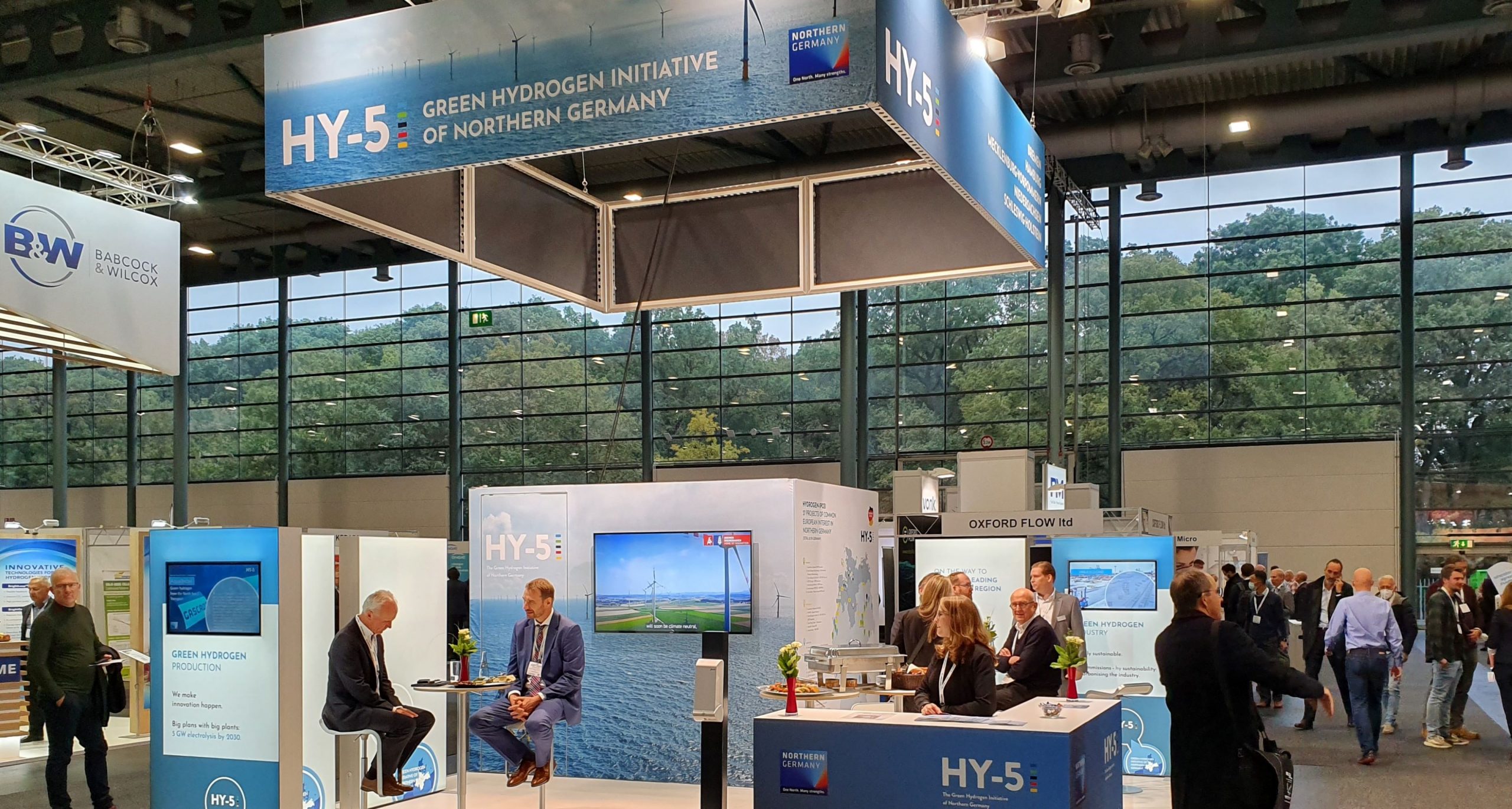 On the way to Europe’s leading hydrogen region

At WindEnergy Hamburg the business development organisations of Bremen, Hamburg, Mecklenburg-Vorpommern, Niedersachsen, and Schleswig-Holstein have joined forces to form the green hydrogen initiative HY-5. The new initiative aims to turn Northern Germany into the strongest emerging region for green hydrogen in the heart of Europe and to complete the value chain for green hydrogen. Together the federal states want to create synergies for locational marketing and communications to establish Northern Germany as a hotspot on the European hydrogen map.

A recent OECD study confirms that Northern Germany is particularly suited for the development and establishment of a green hydrogen economy. The region has unique locational advantages for the production of renewable energies and a large demand potential for green hydrogen – especially from the industrial companies located in the area. The five federal states bring a maximum of experience and know-how in the field of sustainable technologies and energies as well as a high-performance infrastructure to the table. They are trailblazers in wind energy in Germany and have played a major role in shaping technical progress in this field. The expertise gained in the process will now be channelled into the production and commercial use of green hydrogen in collaboration with partners from industry, science, associations, and politics. For 30 years, research on hydrogen technologies has been conducted in the region, and initiatives at state level have long established key networks that drive the topic on an economic, scientific, and political level.

On the way to a green hydrogen economy in 2035

Green hydrogen is an environmentally friendly energy carrier that could replace oil and gas in the future. It is also an important raw material for the chemical industry. Those successful in this field can benefit in the long term – when it comes to the decarbonisation of the economy, competitiveness and structural change, but also with regard to climate protection. That is why the initiative wants to work towards encouraging other companies, think tanks, research institutions and start-ups to establish themselves in Northern Germany in order to develop solutions for green hydrogen together with local stakeholders. The aim is to create a green hydrogen economy in Northern Germany by 2035. According to the North German Hydrogen Strategy, the plan is to install at least 500 megawatts of electrolysis capacity for the production of green hydrogen as early as 2025. By 2030, the capacity is to be increased to at least five gigawatts and thus by a factor of 10.

In six regulatory sandboxes funded by the German government, companies, research institutes, universities and start-ups are working on future-oriented hydrogen projects that encompass topics such as the decarbonisation of the industry, sector coupling, or electrolysis. In addition, the northern German states are well-positioned in terms of infrastructure. Locational benefits include more than a dozen seaports with logistics and import terminals which plan to expand their capacities for importing hydrogen.

Northern Germany is home to a high density of excellent research and science facilities. At present, within a radius of about 200 kilometers, scientists are active at two dozen universities and universities of applied sciences, over 20 Fraunhofer Institutes, Helmholtz centers, energy research networks, or the DLR (German Aerospace Center). Several hundred companies are involved in the North German hydrogen strategy: global players such as Siemens, Shell, Total, ArcelorMittal, Aurubis, Alstom, Continental, Salzgitter AG, Linde, VW, Bosch, MAN and EWE as well as innovative start-ups and specialists such as GP Joule, HYPION or APEX Energy. All these factors turn Northern Germany into a highly qualified region perfectly suited to develop a dynamic hydrogen economy while at the same time contributing to the achievement of climate protection goals.

High-performance ecosystem from the fields of business, science and start-ups

Compared to the rest of Germany, the North German federal states have long held leading positions in the field of renewable energy and are one of the drivers of the energy transition. Consequently, they offer favourable conditions to successfully establish a green hydrogen economy and to create a European hub that not only uses this future technology but actively drives it forward – creating attractive perspectives for both established companies and new investors. This way, they provide strong incentives for value creation, innovation and economic growth, which will promote the development of qualified employment opportunities in the region. A green hydrogen economy is therefore also an integral part of an economic policy that focuses on sustainability.

The particularly suitable locational advantages for the development of a green hydrogen economy contribute to the ambitious objectives of the federal states. The region, equal in size to Denmark and the Netherlands combined, is home to 15 million people who generate a gross domestic product (GDP) of more than 600 million euros, which would put it in 7th place in the EU country ranking.

North Germany lies at the heart of future hydrogen markets along the European North and Baltic Sea coasts. On 2,400 kilometers of coastline, numerous onshore and offshore wind turbines as well as a high number of solar generators ensure the provision of green energy, part of which is still unused today due to grid bottlenecks.